Year 6 have been creating some wonderful decision trees. We have been practising different question forms in French (1. just add a question mark, 2. use est-ce que, 3. invert subject and verb). Our current theme is Animal Classification, to tie into their science work.
First we learnt the words for mammal, amphibian, etc. The children then used French dictionaries to find an example of each class of animal.
We then learnt the words for hair, scales and feathers and the words for fins, feet and wings. The next step was some speaking practice where I showed the children a close up image and they had to guess if it was scales, feathers or hair and the the same for wings, feet and fins.
After that the class were shown a slide of 9 animals (including all classes) and we practised the names for those animals via Kim's game (Qu'est-ce qui manque?). I then gave the children clues, orally, for them to guess which animal I was thinking of.
The next step was for the children to write their own clues (2 per animal) for a partner to guess. They enjoyed writing the answer in tiny writing upside down at the bottom of the page as you would see in a magazine.
The final step was to learn how to turn these clues (statements) into questions. I showed the class 3 different ways that questions are formed in French and they made grammar notes in their books.
They were now ready to create their decision trees. They chose about 5 animals and created yes/no questions, such as 'does it have scales' to narrow it down to each animal. The final version was drawn out on coloured paper, mounted on animal print paper and decorated with foam animal stickers.
They are going to make a fabulous display! 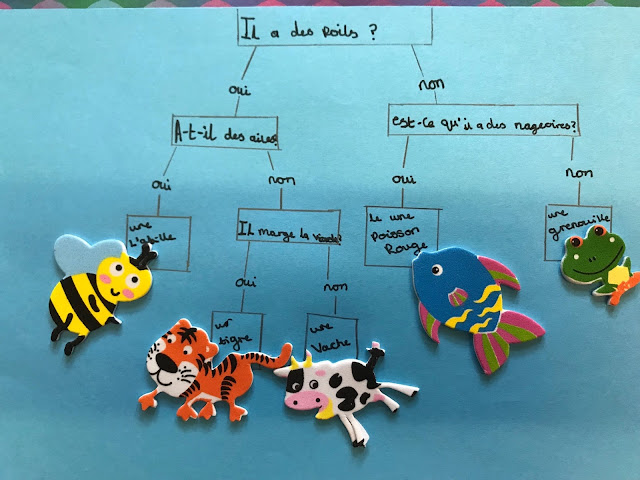 Posted by PrinceLanguages at 04:03 No comments:

On Saturday I was speaking at the Manchester branch of ALL. My talk was divided into 2 parts: Grammar and Cross-curricular links. During the grammar section I shared some songs to help children learn French verbs (avoir, être and porter). Some members of the audience were Spanish speakers and I set us all a challenge – to create some Spanish verb songs on the way home (I promised to have a go myself). I don’t know why but I have made up all my French and Spanish songs whilst driving. Saturday was no exception and by the time I got to the M60 I had managed to fit the verb ‘tener’ to the tune of La Bamba. By the time I got home I’d added ‘ser’, ‘estar’ and ‘ir’. The French verb songs are to well-known English tunes but with the Spanish I tried to put them to Spanish tunes. As well as ‘La Bamba’ I used the ‘Macarena’ and the traditional rhyme ‘Debajo un botón’. I didn’t manage to make any fit to ‘La Cucaracha’ and had to resort to ‘The farmer’s in his den’ but I guess 3 out of 4 ain’t bad.

Posted by PrinceLanguages at 06:20 No comments:


At this year’s ALL Language World conference in Newcastle I presented one of the ‘Major Talks’ with the fabulous Janet Lloyd. Our session was all about Active Grammar. We defined it as:


“The use of movement, physical action, mime or gesture to explore or reinforce  a grammatical point.”


I also asked my Year 6 children for their definitions. Here’s an example:


“Active Grammar is when you actually do the learning by physically getting up and doing it instead of copying down the work. It helps me understand better because I can actually do it and see it.”


Here are the steps in the presentation Janet and I gave…


1)    Janet started with The Split Personality of a Sentence. Audience members kindly volunteered to act this out. First was the punctuation personality. The phrase we used started with a comma and ended with a full stop. Gestures were used to mimic the punctuation marks. The 2nd layer was the pronunciation and intonation layer. The volunteers responsible for this level stood in front of the punctuation level people. They spoke the words of the sentence (one word each). In front of them came the Performance personality layer. These volunteers mimed the phrase. They were each responsible for a word in the phrase and stood directly in front of the person saying that word. Finally there was the Key Grammatical Structures layer. Again, each person in the row was responsible for a word in the phrase and used a mime for the part of speech – based on Catherine Cheater’s word class mimes (hand on head for noun, etc.). Then it was all performed together. We heard the sentence, saw its meaning performed, were reminded of the word classes for each word and also saw where the punctuation came in the phrase. The aim is to help children appreciate the various aspects of a phrase or sentence and how they are linked.


2)    Next I looked at Human Sentences. This involves giving people a large text card each and saying a phrase or sentence. Those with the appropriate card come out to the front and stand in order to create the sentence, This can be at quite a simple level e.g. 'Un chat noir' or more extended e.g. J’ai deux souris noires. In the second example you could give out ‘red herrings’ such as ‘noir’, ‘noire’ and ‘noirs’ (they all sound the same) and see if the right person comes out. It can lead to very useful discussions about adjectival agreement and word order. We then played the Human Negatives Game. Word cards were handed out randomly to the audience members. The words were chosen to be interchangeable so that it was possible to mix and match them to create simple sentences with 3 cards e.g. there were cards with J’ some with il and some with elle. There were cards with habite and some with aime. Finally there were some cards to complete the sentences such as “en Italie” or “les bonbons”. There was also a table at the front with objects or picture cards relating to the sentence (a packet of sweets, an Italian flag, etc). The aim was to find 2 other people with whom you could form a sentence and then collect the appropriate picture/object. The first group to do so would win. However, we also had some “negative people” whose job it was to spoil the fun. They worked in pairs, one with ne and one with a pas card. They had to seek out the verbs. If they found one they had to sandwich it and ‘lock it down’. Once this happened the sentence would be negated and so the group could not collect their object (because now it meant that they did NOT live in Italy, did NOT like sweets, etc) and thus were ‘out’. Warning: this game does get very competitive and lively (especially with language teachers)! We concluded that it is a much more effective way of teaching negatives in French than simply saying “ne and pas sandwich the verb.”


3)    Next Janet led participants through her Active Conjunctions activity, to create some complex sentences. 12 volunteers formed a circle and were each given a card with a simple sentence on it. A selection of conjunctions were available, each in large text on colourful card. These were on the floor in the centre of the circle. The aim was for participants to select an appropriate conjunction and pair up to create a complex sentence. You need to be quick to get the conjunction you need before someone else gets it. The pairs then read out their new, longer sentences.


4)    Next it was my turn to share some further ideas on verbs. The new Programmes of Study for KS2 Languages include “conjugate high-frequency verbs”. This is exactly what I’ve been doing with my Year 6 children but using songs, raps and props. The ‘avoir’ song is to the tune of “If you’re happy and you know it” and goes like this:

The être song is to the tune of ‘The Farmer’s in his Den’ and goes like this:


We then moved on to regular –er verbs. I mentioned the story ‘Par Une Sombre Nuit de Tempête’ and how fabulous it is for exploring the singular forms of present tense –er verbs and the infinitive. See my previous blog posts for more detail on using this story.


I then showed a photo of some of my Year 6 children creating a physical verb paradigm (pattern). 9 children were in the photo, each holding a text card. One person was standing on a chair, at the back in the middle. He was the infinitive and held the card “Danser”. Standing in front of him, side-by-side, were children holding “Je porte” and “Nous portons” (the 1st person singular and plural). I had decided to teach the children the correct terminology to make it easier to talk about the parts of the verb. They even got to wear rosettes for 1st, 2nd and 3rd (1er, 2e, 3e) – green rosettes for singular and purple for plural. The child with “Tu danses” is sitting on a chair in front of the one with “Je danse”. Similarly, the one with “Vous dansez” is sitting on a chair in front of the one with the “Nous dansons” card. They are the 2nd person singular and plural (and so they are on the 2nd row). Finally we have the 3rd person singular and plural. I had a boy hold the “il danse” card and kneel on the floor in front of the child on the chair. A girl holding the “Elle danse” card knelt next to him. They had their green rosettes on saying “3e”. Next to them, kneeling in front of the child with the “vous dansez” card were a girl and boy with “Ils dansent” and “elles dansent” respectively. They were the 3rd person plural and had their purple rosettes. This was supposed to look like lines on a page, with the infinitive as the title and the verbs arranged in 2 columns – singular and plural.


It was then time for The ‘Porter’ Song. This is to the tune of the National Anthem and conjugates the verb ‘porter’, adding some items of clothing to create a rhyming song. The song has now been performed by teachers at ililc5 and in Warrington at the DfE training course, as well as by my wonderful Year 6 children (we watched them perform it, in costume, on video).


5)    Janet then took us through her Preposition Picnic activity. This is a super idea for practising prepositions and links beautifully to summer-themed work. 2 “volunteers” (myself and Steven Fawkes) were given a set of picnic ware and cutlery (plates, bowls, glasses, cups, knives, forks and spoons in different colours, sizes and materials). Janet described where each item should be positioned in relation to another e.g. “Place the large red spoon in the white bowl”. Steven and I attempted to recreate this, individually, in a Krypton Factor-cum-Generation Game style scenario. Next, I gave instructions, in French, for Steven to follow to create a similar structure of picnic items.

You can see the presentation slides and The Porter Song on the ALL website here.
Posted by PrinceLanguages at 11:41 No comments: