I'm going to be talking about family in French with Year 4 next half term. I always avoid getting the children to describe their own families as this can cause distress for some. In the past I have often used the Simpsons as an example but this time I am going to use the royal family, having realised from my own children how little they know and how they don't tend to recognise anyone beyond the Queen and Kate. Here is a slide with photos of members of the Royal family, set out in a family tree.


You can use this to ask questions using "Qui est?" and "comment s'appelle?" such as "Qui est la mère de Zara Phillips?" or "Comment s'appelle la tante du prince George?" You could also play "vrai ou faux?" with various statements about the family tree.
I realised that, following the birth of Prince George, we need the word for great grandmother and great grandfather. They are arrière-grand-mère and arrière-grand-père respectively. Great grandchild is arrière petit-enfant.

Of course, you could also use this as an opportunity to do some cross-curricular work with whatever you are studying in history, such as the Tudors or Ancient Greeks. (Some caution is needed when presenting the family  tree of Zeus!). At ALL Language World in April I included this in my presentation on cross-curricular links. I wrote a mini play script in French called La Famille de Zeus. You can seethe play script and name badges here.


Posted by PrinceLanguages at 05:11 No comments:

Year 5 and I have been exploring sentence construction (word order, adjectival agreement) through the theme of Autumn leaves. They wrote some great sentences to describe leaves and turned these into beautiful posters. 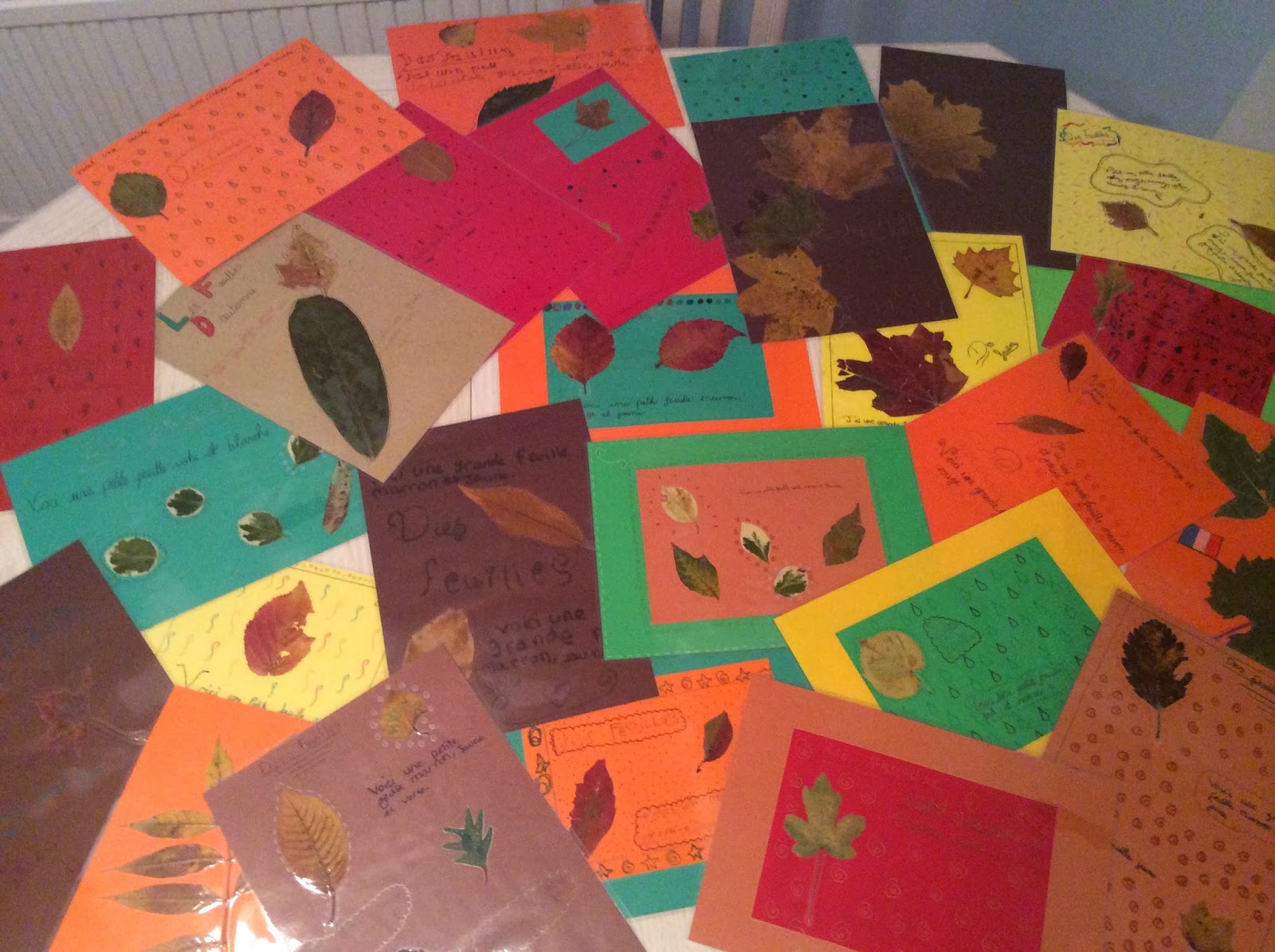 Next I shared a poem with them, all about Autumn leaves. Here it is... 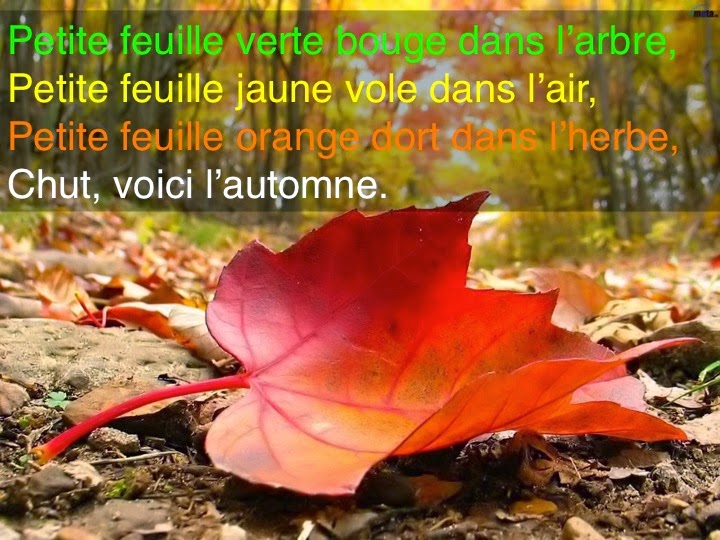 This poem was almost exactly what they had been writing in their sentences to describe leaves (using grande / petite) before feuille and a colour word after it. We had also come across 'vole' when describing the actions of woodland creatures. We discussed the meaning of the unfamiliar words, using cognates and near cognates to help us, and discussed their pronunciation.
After reading the poem together it was then time to turn it into a performance, which Year 5 did brilliantly today.

I was fortunate enough to see the marvellous Janet Lloyd last weekend and picked her brains. Following her suggestions as best I could (and adding a little bit of my own) this is what we did...

We discussed the personality of Autumn. I said that I wasn't sure what Autumn would be like as a person whereas Summer and Winter are more obvious. We tend to imagine the sun with a happy face and the north wind as mean but what is Autumn like? We also thought about the last line of the poem and why we were being told to be quiet. The children had lots of suggestions, such as Autumn being a bit scary but most thought it was because it is a quiet time with leaves dying and animals hibernating.
The children then worked in groups of 4. They each took on the role of one item from the poem - the green leaf, the yellow leaf, the orange leaf and Autumn. They started by standing in a tight circle representing the tree trunk. Then it was up to each group to decide how to move and how to deliver the lines (changing speed and volume etc). One group even decided to repeat the last line several times, getting quieter and quieter.
Each group then shared their performance with the class and we had as many different versions as there were groups. The endings were especially creative and the way they chose to portray Autumn. Sometimes he (she?) would sneak up, or whizz in, or go to sleep, take a bow, etc. we saw Autumn as sleepy, playful and creepy. In one version he even captured one of the flying leaves.

The children amazed me at how creative they were, especially in such a short time and they absolutely loved this. I haven't done much drama in my lessons but have definitely been inspired to do more now.
Thank you Janet Lloyd!

Posted by PrinceLanguages at 15:11 No comments:

Putting ourselves in their shoes

I thought it was about time that I learnt a new language and so enrolled in a Beginners' Polish class at my local college. Why Polish? Well, I'll admit I was torn between Italian and Polish but thought Polish would be more of a challenge (and I wasn't wrong!!) as Italian would be rather similar to the languages I already know (French, Spanish and Latin). Also, I knew there would be some Polish children at the school where I've started teaching.

As well as learning the actual language I am also gaining a fascinating insight into what it must be like for most of the children I teach. It has put me in their shoes and it's not as comfortable as I thought so I decided to share some of my experiences on my blog.

Unfortunately I missed the first week because I was ill.  This meant that I had to turn up to my first ever Polish lesson (week 2 of the course) knowing that I was already at least 2 hours behind everyone else. It made me very nervous.
At the beginning it was a little daunting as the tutor and other students were all chatting away in Polish but they were all very friendly and made me feel welcome. The tutor went easy on me as it was my first week. She also asked me to sit next to someone who was particularly good and knew what he was doing.

2) How do they know that? I thought this was for beginners?

As the class progressed I started to realise that some people knew more Polish than others and that they knew things that they hadn't been taught in week 1. After making a few inquiries I learnt that 3 guys had joined the class as they had Polish girlfriends. They had picked up a fair bit of vocabulary but not phrases. It unsettled me at first that we weren't all starting at the same place - it wasn't a 'level playing field' and it made me realise that this is the situation faced by many of the children in language classrooms everywhere.

3) ¿Qué?
There were moments when I really hadn't got a clue what had been said. The first listening exercise sound like gobbledygook. Suddenly I heard a word (yes, just the one!) that I recognised. It was a fill the gap exercise and I had so many gaps I felt like giving up. Once the tutor went through the answers and then played the recording again it all fell into place like a jigsaw. Suddenly I could 'hear' the words. How many times have I told the children in my class not to give up and that it will come eventually once they learn to 'tune in'?
4) Performing a role play
At one point we were asked to practise and adapt a role play (from the text book) in pairs. At the end of the exercise the tutor asked who would like to perform theirs for the rest of the class. Not a single hand went up! Now that might be where an adult evening class differs from a KS2 class but even so, it reminded me of that sinking feeling when you are secretly thinking "I hope she doesn't ask me". I felt I was still a week 'behind' everyone else and so was more reluctant than I would normally have been to volunteer. Eventually we all had to do it and all got through it painlessly, but it still made me think how some of the children in my class must feel sometimes.
5) What on earth is she saying?
The thing I found hardest of all was grappling with the phonics of the new language. Polish has some sounds that do not exist in any of the languages I know and these took some getting used to. I kept wanting the tutor to repeat them so I knew that I had heard the sounds correctly. Even then, simply reproducing them was trickier than I had expected! In addition there are some bizarre (to a non-Polish speaker) phoneme-grapheme correspondences (sound-spelling links). Often 2 or 3 consonants combine to make a new sound, which seems so bear no resemblance to the letters themselves or the sound they normally make. It is going to take a while to learn them. Many of you will know my passion for phonics and that it is often as subject I speak on at local and national events. My experience at my first Polish lesson reinforced in my mind everything I have always believed about the teaching of phonics. It is vital to teach the key sounds of a language and their spelling links early on and, to begin with, the letter sounds are far more important than the letter names (alphabet).
I shall keep you posted how I get on....
Posted by PrinceLanguages at 14:07 No comments:

Tomorrow I'll be practising colours with Year 4 and we'll be doing a multisensory activity. I learnt about this activity so many years ago that I cannot be sure of the source. I think it was first introduced to me on the CILT Methods and Materials course over a decade ago, in which case it should be attributed to Carmel O'Hagan. If anyone knows different then please let me know and I shall make amends. 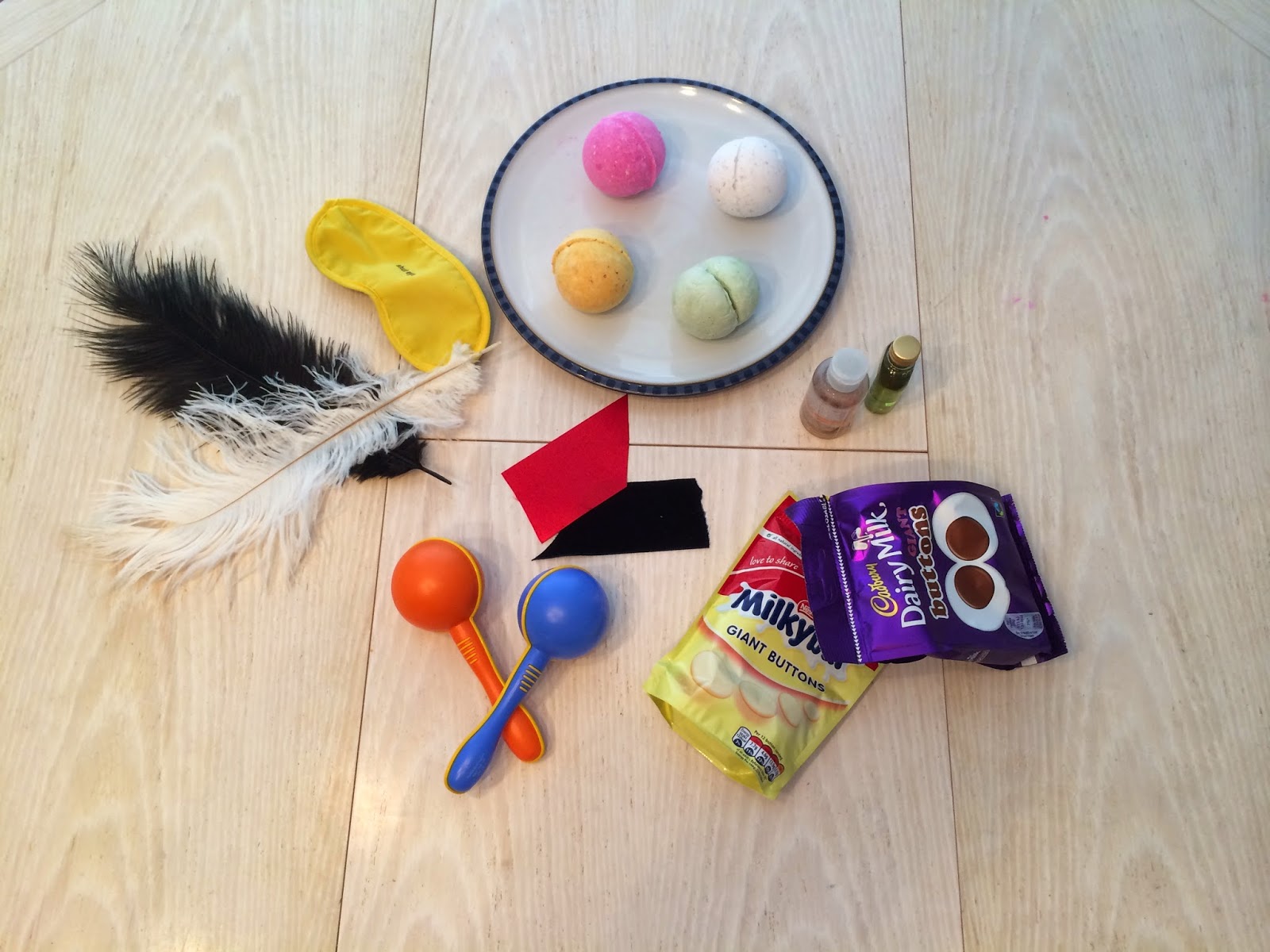 The original idea was to get the children to use colour words, preferably from memory. The activity is first demonstrated using a volunteer. The volunteer is shown a pair of objects that are similar (but not identical) in size, shape and texture but which are completely different colours. You could use 2 toy cars, 2 teddies, 2 drinks bottles, etc. provided they can be distinguished by feeling them. Once the 2 objects have been presented to the volunteer, e.g. "une voiture rouge......une voiture jaune" and the  volunteer has had a chance to feel each one, he/ she is then blindfolded. The teacher then hands one of the objects to the volunteer, who must identify its colour by touch alone, saying "c'est la voiture rouge" or just "c'est la rouge".

The activity is then played in small groups.

I have taken it a step further by involving some of the other senses. I have some shower gel and some bath bombs to smell..... 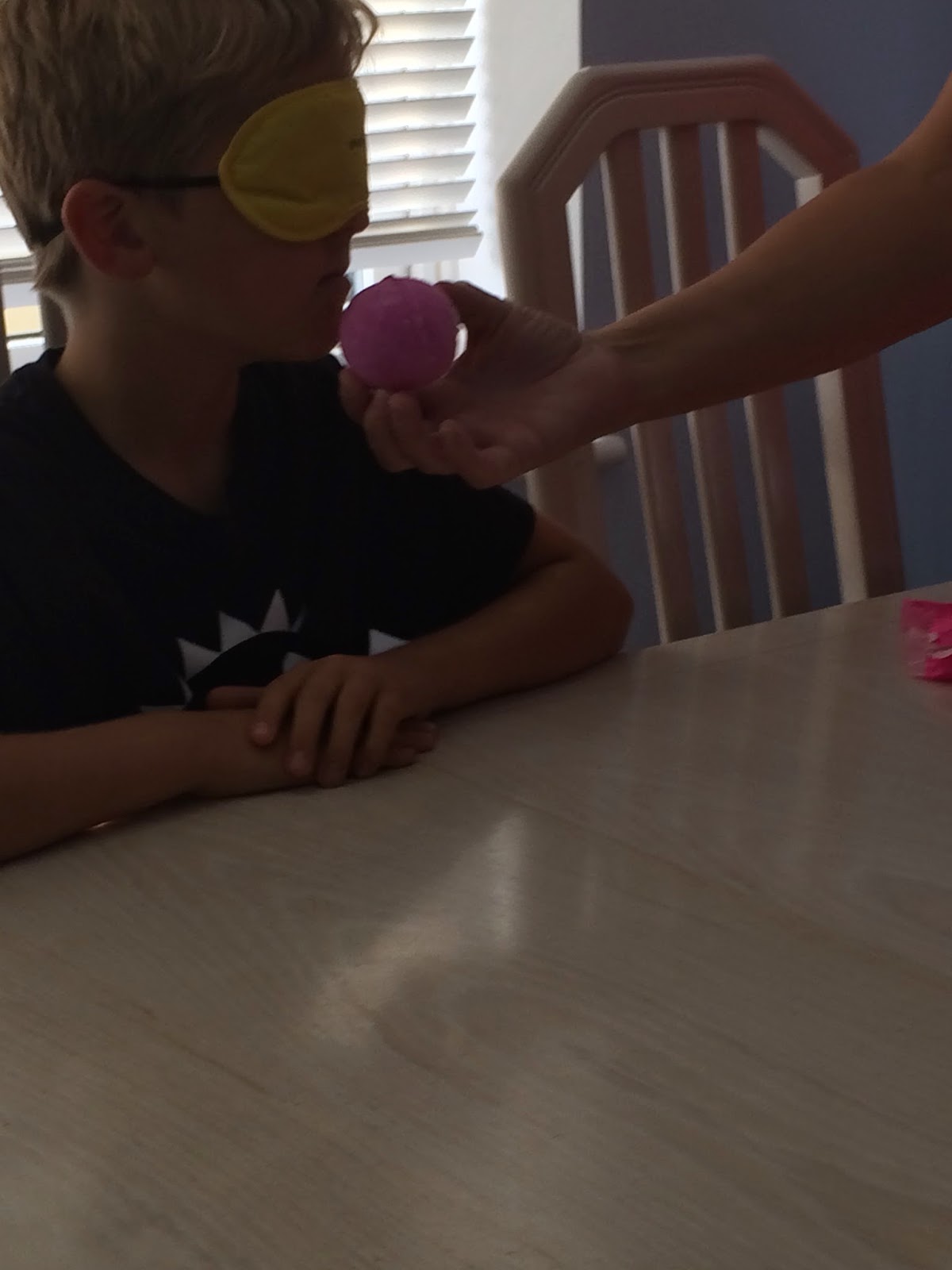 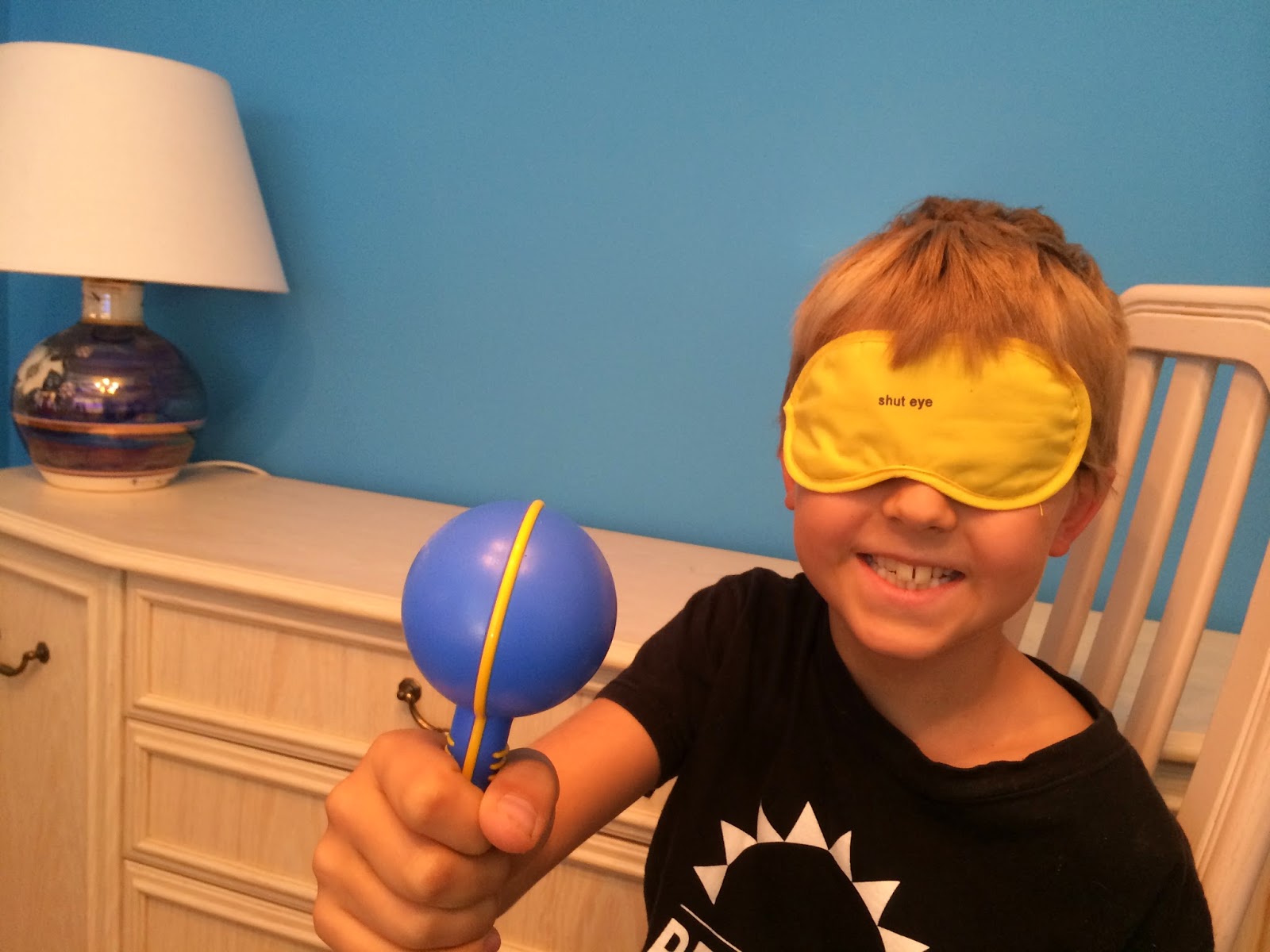 and some chocolate buttons (milk and white) to taste. I also have feathers to feel and some different fabrics - satin and velvet. 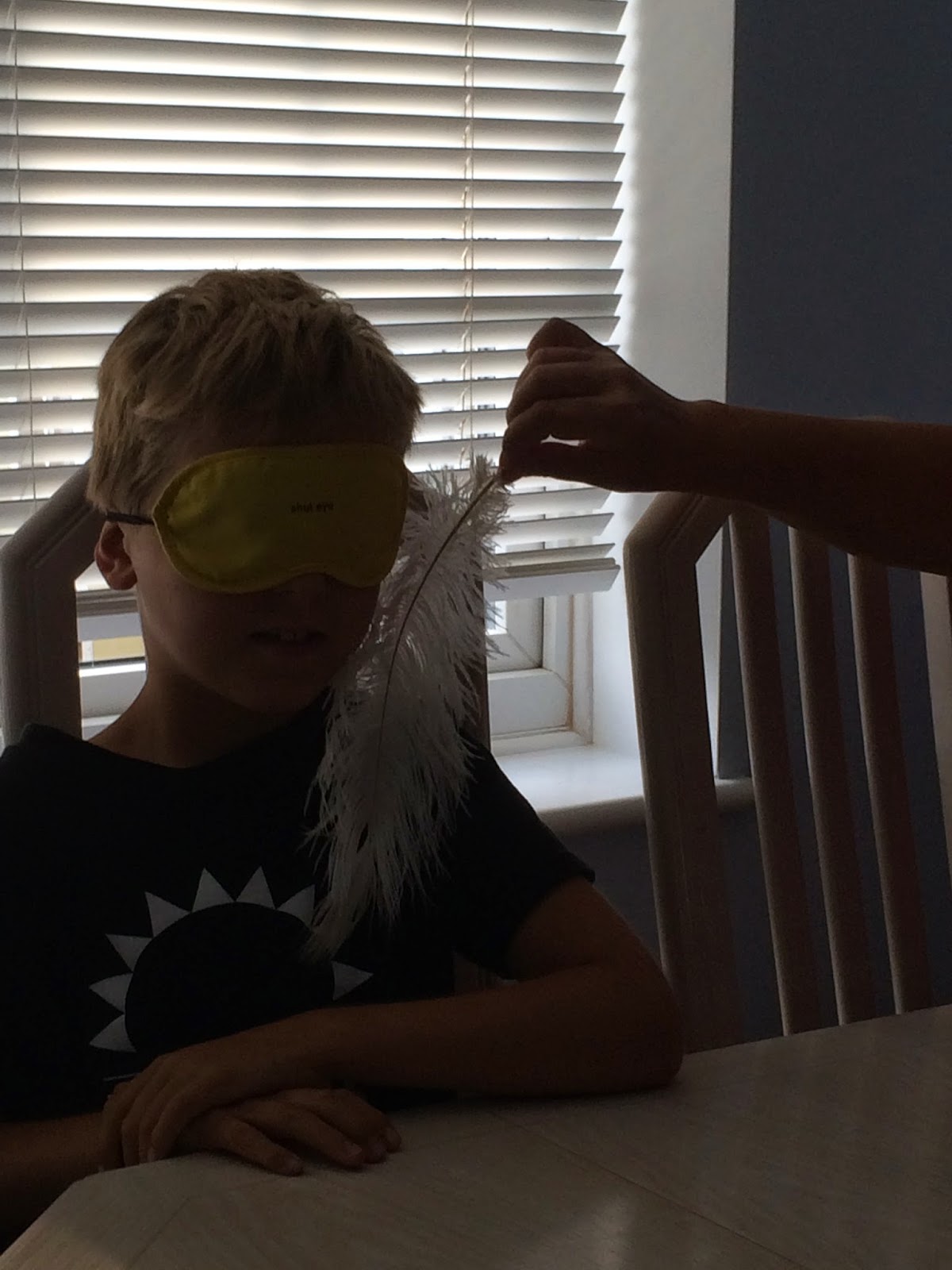 Of course, you could use this activity to practise all sorts of language - such as grand / petit.
Posted by PrinceLanguages at 13:13 No comments: